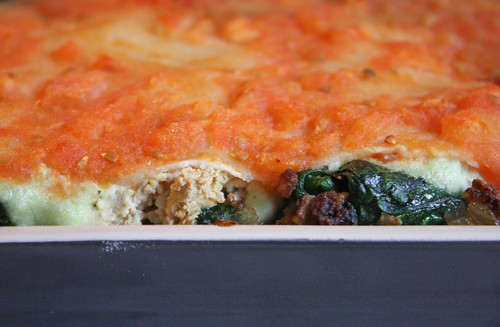 Each Christmas Eve we partake in a family gathering at Mr MessyCook's parents' house, a meat-saturated event. To be honest my mother-in-law is very good about making sure I have absolutely tonnes to eat, and one year she even used soya mince in the main chili pot. Everyone ate it without complaint; the whining came only afterward when she announced it was veggie. Get your eyes rolling.

At any rate this is my first vegan Christmas and the MiL who's spent the past eight years learning how to cater to a vegetarian is now left with most of those recipes unavailable to me, her daughter-in-law.  Consequently I've volunteered to bring my own food (plus I'm bringing a vegan friend along for the ride) and my partner's kindly requested lasagna. My cashew-based smoky spinach lasagne has gone down well in the past and, besides, who doesn't like lasagna?

If you've never tried a vegan lasagna, give it a try. It's a much healthier alternative and, despite it sounding like a difficult task to achieve if you're used to a dairy-filled diet, it's well worth giving it a go. And I don't care what anyone says about lasagna being hard to make. It's not. Here's a selection of vegan lasagne recipes from around the interwebs, some which I've made and others over which I'm still drooling prior to trying.

Spinach is king (plus other greens and veggies)