In yesterday's post I chose the path of rant, bellowing the pumpkin travesties of the world, ending with a recipe for my pumpkin and okara ravioli. Today, with this week's round-up, I choose to embrace the talent of others in their own pumpkin based kitchen endeavours.

Soup's On (and a salad too)

Who doesn't love a winter warmer on a cool day, even if it's technically autumn (“autumn warmer” just doesn't have the same ring, sorry)? Soup is a year-round favourite of mine, a meal in itself which encourages any amateur cook to improvise with what's currently in season. And in case you didn't know, pumpkins are all the rage right now.

Speaking of warmth, a bit of chili is always welcome in that department and Eat.Run.Do Yoga combines that with our beloved pumpkin in this recipe for Thai pumpkin soup. Pumpkin milk and pumpkin and/or squash are complementary, so I can only imagine this being a delicious fall treat! And shallots are in season, to boot!

Add an extra 'l' to chili and we're left with a recipe offered by Method, where Ashley's provided an easy guideline for pumpkin chilli. So now I face a dilemma: do I make chilli with pumpkin or this Rustic Tomato Pumpkin Bisque first? I'm a real sucker for a good tomato soup... but then again chilli's an old school favourite. Life is hard.

If soup isn't your cup of tea (people have insisted on calling stranger things 'tea') but you still crave smooth and liquidy goodness, then try this pumpkin pie smoothie on for size. I say that literally because I often chose, being the fashion expert that I am, to share that which is going into my mouth with any clothing I might be wearing at the time.

Oh, pssst, you should always eat salad with soup. Why? Because then you have an excuse to try this scrumptious autumn salad which uses pumpkin seeds and butternut squash. If you don't have any butternut squash on hand, sub with pumpkin and you'll be all set to go!

These Pumpkiningeradamia cupcakes are not only fun to pronounce (or try to pronounce); they sound good too! At any rate, how could anything involving candied ginger be bad? I'm also quite drawn to this tofu ricotta pumpkin cheesecake, a veganised version of a ricotta based dish. I love the idea of using light miso in a dessert! Q: why didn't I think of that? A: because someone's who's a little more clever beat you to the punch. BOOYAH. 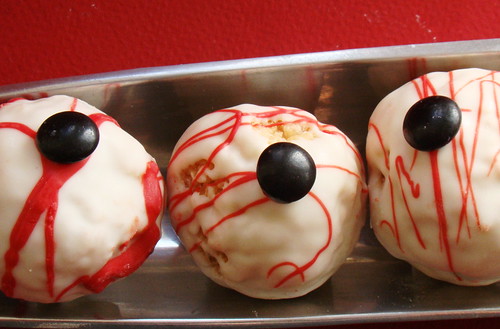 Zombie Eyeball Crispies. I haven't had a rice krispy styled treat in many, many years, but as soon as I get my hands on some vegan marshmallows I'm going to have a go!

Rolled Sugar Cookie Eyeballs. Allyson, of Manifest Vegan, never ceases to impress with her high contrast photographs. The thing is, I suspect everything's just as good as the photos imply, these totally cute cookies included.

Pumpkin Pie Infused Vodka. The verdict is still out on this one, but what a concept! I'm excited to hear about how the end result tastes.