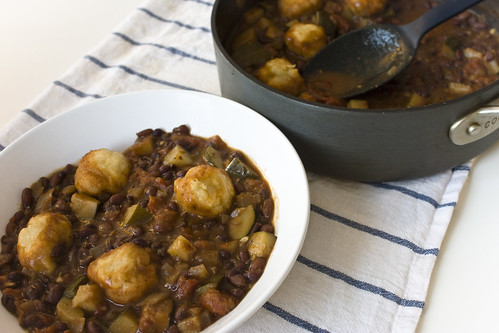 I'm going to share two very important facts relating to Britain: Latin ingredients aren't always easy to find (and only in recent years have I found semi reliable sources), and the locals begin to empathise with residents of Siberia when there's a fraction of a millimetre of snow on the ground. At least they think they can.

But this time we actually got more than that- a good 12-16 inches I'd say (of snow, that is). You'd think this would mean public mayhem given my previous analogy, but it's in fact the opposite; everything comes to a quite literal standstill. Cars remain stationary, trains stop running, planes don't fly, and people just stare quietly and eerily out of their windows (whilst I apparently stare inappropriately in).

In a way it's nice to have something that forces us to stop already, chill out, be forced to just sit down and do diddly, but more than that it's the sort of event that evokes a determined craving for hot comfort stews. More to the point, it's an excuse to binge on big pots of yum. And dumplings! Who the heck makes a stew without dumplings?

Traditional flour dumplings would work fine here, but there's something about black beans that screams latina! That and I found a big ol' bag of masa and I don't want to cause Paul to OD on tortillas. Plus he's quite possibly the biggest fan of dumplings ever (imagine, upon their mention, glazed over look in eyes, goofy smile, memories of yesteryear).

Naturally I made a huge mistake, that being such a small quantity of dumplings, so feel free to double that part of the recipe. If you use a sauté pan or good enough sized frying pan, you'll fit them all in there no problem!

Also consider, as mentioned in the recipe below, how moist and gooey you want your dumplings. I like mine to be fairly dry, but if you like a slightly more mushy dumpling then increase the fat and/or liquid content a little bit. Keep in mind, however, that masa dumplings won't ever have exactly the same spongy texture as their all flour equivalent.