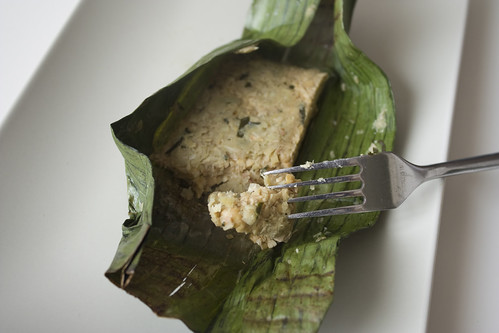 Imparting a slightly sweet but not overly strong flavour to foods, banana leaves are a popular cooking vessel in Southeast Asia. They're strong, sturdy, and can be used to steam and/or fry food. You'll see them as food parcels grilled on the streets, in villages, in homes. Common sweet recipes use sticky rice based fillings and savoury fillings often consist of fish based concoctions. In my recipe I chose simple tempeh and aromatic Cambodian lemongrass paste for the filling.

Before I opted for a wholly vegan diet I developed a rather insistent craving for hard boiled eggs once or twice a month. Upon eliminating them from my diet I found it wasn't cheese that was the hardest to give up, as everyone claimed it would be, but eggs. My point is those cravings have metamorphosed into one for these fermented soya bean cakes; when I want tempeh I need to have tempeh, and this recipe was born on such a day.

I tend to opt for tempeh as a replacement in recipes that might otherwise use fish filets, and that's what I've done here. Steamed and fried in banana leaves, tempeh develops a flaky and delicate texture with a delicate flavour that can be intensified to suit your own preferences (add more or less paste, sauces, and/or other seasonings).

If you've got an outdoor grill then opt for that over a pan (it's more traditional and the flavour will rock)!