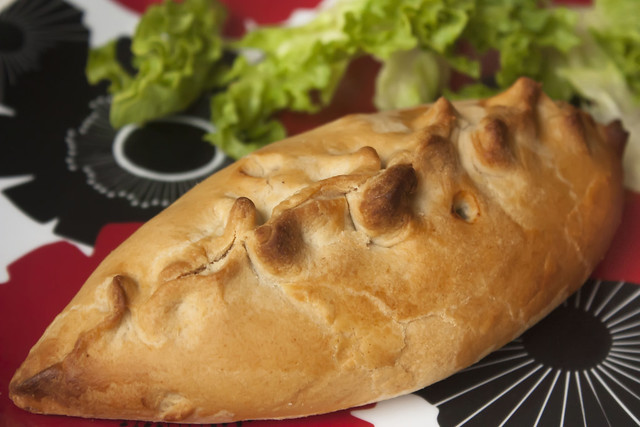 A few weeks ago my friend Holley told me about a pasty shop from her native town in Cornwall, reminiscing about her favourite cheese and bean pasty she consumed before choosing to ditch dairy.

Of course what she meant by the story was that I should make a vegan version for her, so that's just what I did. Nevermind that I ate them all. It sounded like an easy task, and since I've taken up cycling when I need to get somewhere local I've had a more monstrous appetite than usual. I made these on one of the nights after a day of being out on my bike. By "day of being out," I probably mean I just cycled to the store and back.

Whatever, I'm a pastry enabler. I don't need excuses. The point is a good pasty is easy and filling, which is just what you want after a difficult .03 mile cardio workout.

If you've got some leftover filling or are nervous about packing the pastries too tight then just pop it into an oven proof ramekin, cover it with foil, and bake with the pasties! That was my breakfast the next day.

I used Edam cheezly but I'm confident enough in the cheddar to recommend it anyway. In fact I think most vegan hard cheeses would work, but if you use something else then don't go by the weight I provided below; instead go by the 1 cup. A teaspoon or two of marmite in the mix also won't go wrong.