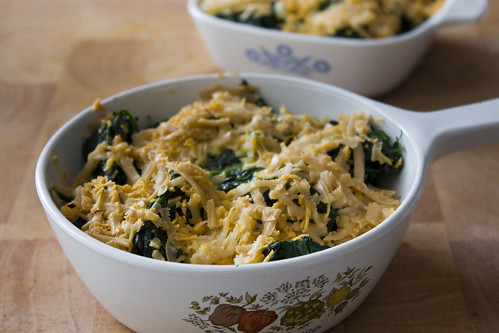 Unsure whether these should be called vegan au gratin potatoes or scalloped potatoes, I hit the googlenets to get down and dirty with some serious research to ascertain the difference between au gratin and scalloped. All the Yahoo! Answers responses and Wikipedia entries in the world would not prepare me for the number of serious queries about boxed and freeze dried potatoes out there.

Yes, millions of answers out there, laying latent in the hope that a functional half-wit will click through. It breaks my heart to realise what people consider to be food and that half an hour is considered an unreasonable amount of time for meal preparation. Okay, shutting up. I'll judge the world more later.

Digging around surfaced the general concensus that the difference is vaguely semantic but commonly acknowledged as follows: potatoes au gratin are generally layered with cheese, topped with breadcrumbs, and oven-baked to obtain a crispy top layer. Scalloped potatoes, on the other hand, are cooked in a milk based white sauce.

So what happens if you combine the methods? Do I have vegan au gratin potatoes or vegan scalloped potatoes here?

Whether you call it a gratin or scalloped potatoes, this veganised version relies on a slightly atypical cooking method. Calling all folk who want a 30 minute scalloped potato dish: using the hob speeds the potato cooking up marginally and a final few minutes under the grill melts the cheese topping.

If your soy milk and yogurt mixture doesn't cover all of the potatoes completely, don't fret. The lid on the pan will help uncovered potatoes to steam, and if you use a good waxy new potato then they'll cook fairly quickly anyway. If, after simmering for the instructed 15 minutes, your potatoes aren't close to being done then try adding some more soy milk and yogurt and continue cooking for a little longer. 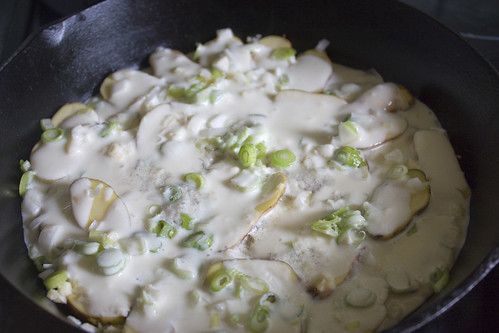 For the cheese topping, I used a mixture of Daiya cheddar style shreds, smoked Sheese, and grated toffuti mozzarella, but feel free to use whichever vegan cheese you prefer. Come to think of it, any creamy sauce would most likely work as well.