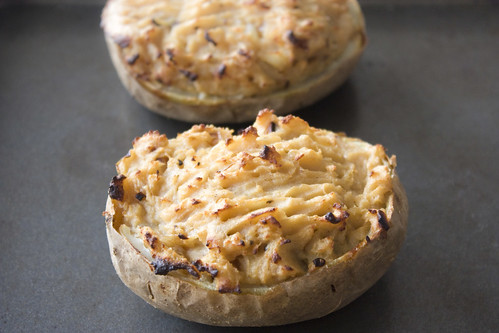 As a child I was often exposed to the horror that is microwaved "baked" potatoes, a travesty which, in my opinion, is one to compete with that of the most audacious crimes in this world (like using apostrophe's incorrectly- hello mister greengrocer). Har har.

It wasn't until I moved to Britain that I realised it was possible to achieve restaurant style potatoes at home, baked spuds with crispy skins and a smooth and creamy centre. Microwaves may save time, but they make a potato taste like... err a microwaved potato to be precise. I'm a snob. I also don't own a microwave.

So anyway, as a child I also loved to consume boxed twice baked potatoes. Layer the fact that I didn't know real baked potatoes were possible on top of this tragic aspect of my youth and it makes sense why I didn't realise until recent years that not only could you make your own oven baked potato, but that it's also possible to make homemade twice baked potatoes! Life is miraculous and, yes, I'm American.

If you're looking for an easy comfort food then twice baked potatoes should be an obvious maybe on your list of potential meals. Try this vegan version served with a nice salad or on their own (my general rule is one whole baked potato is an adequate meal). The yoghurt adds a creamy richness to the potatoes while the miso and sherry impart a very mild Eastern influence. Should you omit the latter ingredients, some extra salt may be worth chucking in (and maybe some extra yoghurt too).

Don't feel limited to the ingredients I've chosen for this recipe. Try vegan yoghurt and fresh chives (for a mock sour cream and chives flavour), or your favourite fake cheddar with facon bits.