One aspect of life in England I haven't and will likely never grow accustomed to is winter. While I've never been able to put my finger on exactly what it is I loathe so much about these months on this landmass, I know I dread them with an intensity bordering on hysteria.

But then I remember I live in a country with seventy or eighty varieties of commercially available potatoes. That's opposed to the, if you're lucky, five you'd find in an average American supermarket. My family still doesn't believe me when I explain the half aisle in the grocery store dedicated to just potatoes.

What does this have to do with winter? Comfort food. And potatoes are the epitome of that statement because, well, potatoes.

This year has not been good on me and so I am already loathing this winter with a depth greater than any I've known in previous years, but potatoes. 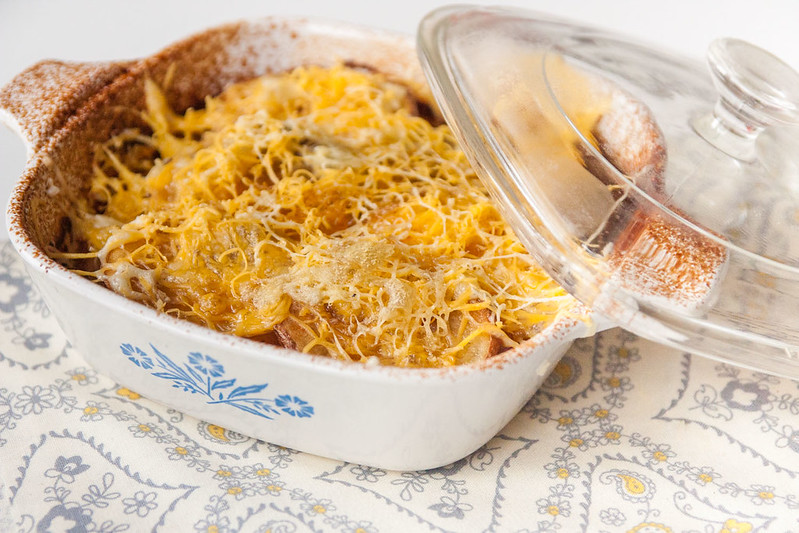 Boulangère potatoes are a gratin of thinly sliced onion and potato layers cooked slowly in stock, the less rich (but still packing a flavoursome punch) sibling of potatoes dauphinoise (which is made with lots of heavy cream) .

The inspiration for this vegan potato recipe came to me after I realised it had been at least 6 hours since my last potato, and days since beer.

Don't forget to taste the broth for salt, and if the yeast extract (I use Meridian brand) is at all bitter, you can balance it with more salt and some sugar.

Anyhow, I've got to pop to the shop – I'm out of potatoes.