Everyone has something without which they simply cannot function. Everyone's got a food obsession, a weakness. The chosen treat of many readers is likely a dish that's been bastardised from the Italians (in the form of chemically enhaced dough slathered with the lowest quality ingredients imaginable and finally topped with a fatty, oily sediment which one might loosely call "mozzarella"). Or burgers. Or cardboard sandwiches.

Mine is bastardised Arabic food, just in case I haven't mentioned that already ten billion times. Chickpeas are my BFF. Aubergine (that's eggplant to you) is my homeboy. I want to marry a pomegranite. My closet lover is a spice shelf stacked with goodies like sumac and cinnamon. You get the idea. I live for this stuff.

I just returned home from a two week surprise visit to see my family in Maryland, 3500 miles on the other side of the Atlantic (it's a good setup, really), and through that whole time the only Middle Eastern fayre to end up in my stomach tubes was some babaganouj from Whole Foods. By the time my plane landed at Gatwick my body was ready to shrivel up and die.

But you know how it is when you've been away: you return home to a ghetto-stocked fridge full of half-eaten leftovers. Thankfully one of those was a tub of hummus I'd made before I left. My husband had already been instructed to greet me with an aubergine, and the freezer held a few old sheets of Phyllo pastry which called out to be defrosted. Provided below is the resulting tale.

I know people get frustrated with recipes which don't include exact amounts and I know I should take better care to measure so I can pass things on properly. But here's the thing: I suck. Oh, and another thing: your worst case scenario is going to be gooey pastry and aubergine. It's still going to taste good if you're into these sorts of flavours.

I used Iranian Advieh in the mix, but consider this optional (here's a recipe for advieh if you want to try it yourself). I personally like the warmth induced by the cinnamon and hummus combination, but my husband was slightly more skeptical.

If you're not sure about my instructions below, or are confused, I've included some pictures of whole who wrapping up process. 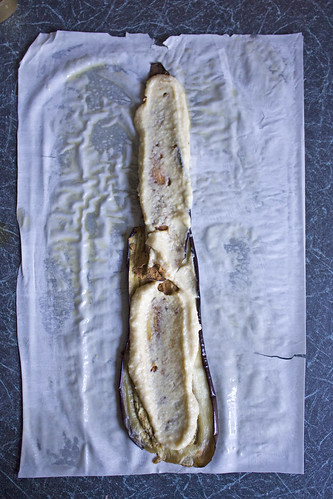 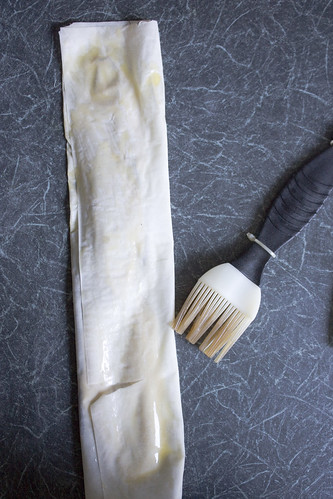 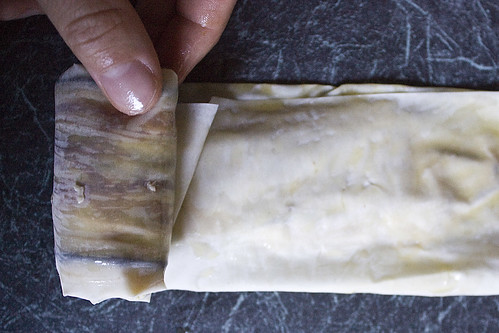