Every once in awhile I come across a product I forgot I needed. Eggs have always been my most missed food as a vegan, initially because I knew the one edible that could one day sway me would be the French macaron, but then I worked out how to make vegan macarons. 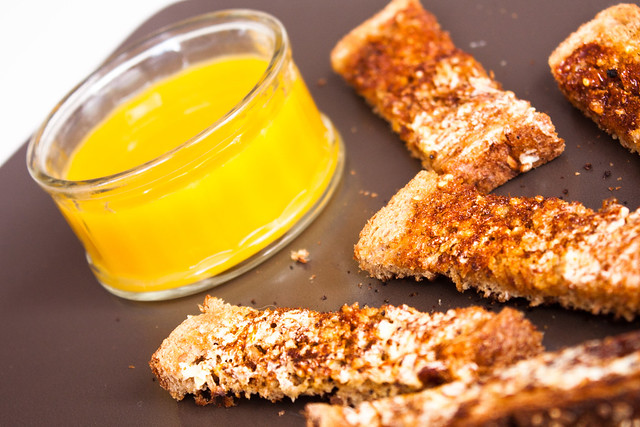 But what about eggy soldiers with marmite, the tastiest thing to hit Britain's breakfast table since the crumpet? It's a simple but comforting brekkie of soft boiled eggs and strips of buttered toast, though obviously in my case also slathered in marmite. The egg usually comes in an egg cup, the top knocked off, and served with a teaspoon to eat. The toast is cut into strips (i.e. soldiers – I know, ridic) and these are dipped in the yolk.

Alas, while I miss the flavour I do not miss the cruelty (and the simple fact of what an egg actually is), so that love was shelved. Then along came The Vegg.

If you miss eggy soldiers then The Vegg is your solution. Really (based on a firm study of two people and a cat). Obviously it's only a yolk replacement, but let's face it – that's where all the flavour comes from anyway. Toast and warm Vegg will change your life. I ate it for about 12 meals in a row. Vegan Omelette made with Vegg

The other obvious dish was an omelette, for which I've included a recipe. The ingredients are minimal and it's much softer than other versions of vegan omelettes I've made from cookbook recipes. As a result it's also a little fussier, but I prefer the softness; just be careful with the handling is all.

So far as fillings are concerned I used a mix of asparagus, tomato, onion, and seitan, all pre-grilled. You could use any number of fillings, however, so be creative!

The Any Way You Want It Vegg Omelette