Vegans and vegetarians alike understand the absurdity of some statements which certain individuals somehow deem necessary to not only process in their questionable minds but then actually say out loud. Not that I'm in any way skilled in the art of saying things that make sense, but I do like to at least vaguely know what I'm talking about before I criticise anything. Most of the time. 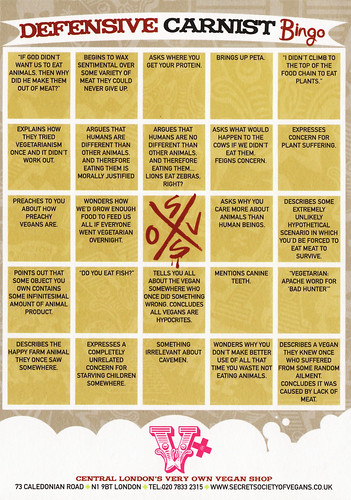 Please note Defensive Omnivore Bingo is originally by Brian VanderVeen, and he should be given credit where credit's due!

1. The classic: "but where do you get your protein?"

Seriously? This one always amazes me, not because people are curious, but because they don't seem to gear the grey matter up before the question departs their mouthbits.  Who taught you meat is the only source of protein? Some of the best sources of protein in the world are vegan, and they don't contain the nasty saturated fat quantities associated with what people tend to consider one of the best sources of protein: red meat.

In fact many people actually get too much protein. I'm gobsmacked that someone who eats a fry up for breakfast (eggs + bacon + sausage), a burger for lunch, and a steak for dinner, has the nerve to say anything to me about my protein intake (a frequently encountered vision I witness on family visits to the states). Slow down, buddy, because Atkins generally forgot to mention all that fat in fact leads to heart disease. So, in short, meat is not your only protein source, period.

You're right. An engorged breast isn't a nice thing, so it's a good thing those little baby cows are there to ease the mother's burden.

Have you ever seen a cow nursing her young in a natural environment? The udders are nowhere near as bloated. The fact is, we force pregnancy upon the females and then take her young so we can drink her breast milk (what happens to the calves is a whole different story of course).  Cows do need to be milked, and it's the process of breast feeding her young which is the answer.

3. Some sort of passive aggressive statement implying how vegans are such a nuissance and do nothing but argue their cause.

I do recall my 14 year old vegetarian self so I know this can be the case, but here's the thing: most veg*ns don't bring it up unless they have to.

In fact I'd go as far as saying most such conversations arise from a passing statement by the veggie which is then blown into a big bang style issue by the resident omnivore. I make a real effort to not boast about my ethical choices outside of my own home, but I can't tell you the number of snarky comments and accusations I've encountered from people the second they find what what I don't eat.

Who's being the passive aggressive nuissance?

I'll admit that when I became vegetarian at the age of 12, my diet was ridiculous. But let's think about this a step deeper: was my diet really any healthier before that change? If you want to argue this question in health terms, I think it's fair to say if you don't eat healthy as an omnivore it's not surprising if you follow poor eating habits as a veggie too.

If you want to argue this question on flavour and variety, that's a different story. It goes without saying that when you remove an item from an array of others then you have fewer options. Technically.

If you do question what we eat, however, please consider how often do you evaluate your own food choices. A lot of people don't believe me when I say I can go a couple of months without repeating a meal. The reason I do this is because I choose to see doors opening in the face of change; most vegans I know eat a greater variety of foods and are more open to trying new dishes than anyone I've met who genuinely can't fathom what I eat.

So if you're really asking this question then I'd like to set you a challenge to cook a new meal once a week, and a vegan one to boot. It doesn't have to be fancy, nor does it have to be epic in preparation. Broaden your horizons. I promise it won't hurt much.

Dude, don't say this out loud. Think it and look up the possibilities because they're there, but don't say it out loud. Just think about it.

If you do, be prepared for, well, stuff. Real insert foot in mouth moments are a possibility. Right at that moment an overweight vegan partner will step out from behind the wall you hadn't noticed was there until now. Or you will die a death of too much vegan cake because said vegan will need to prove to you that vegan junk food is beyond possible (I can't tell you how many vegans I know who gained weight after ditching dairy, and they put it all down to learning to bake).

To the thin veggies this sort of statement can often come across as a cloaked "huh, no wonder you're so waifish and pale" and to those who are dealing with weight issues it's downright insulting. Don't get me started on that PETA ad, either (and yes, I'm one of those vegans who doesn't like PETA much).