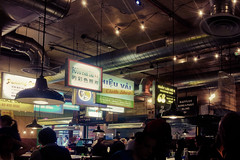 A good introduction to generalised East Asian food, London's own Tampopo (why the name change I don't know) serves a selection of dishes from across the Orient. Thai, Malaysian, Vietnamese, Indonesian, Singaporean, Japanese, Filipino, and Korean   dishes feature on the varied menu. The food comes out quickly, so it's a perfect spot for lunch if you're on a time restriction, and the menu is pretty reasonably priced for the most part. Authenticity is lacking in a lot of respects, but as I said I still think it's a good introduction to these cuisines. East Street marks Ve on the menu for vegan, V for vegetarian, which is great, but at the same time the lack of chefs' awareness about ingredients is a little off-putting. 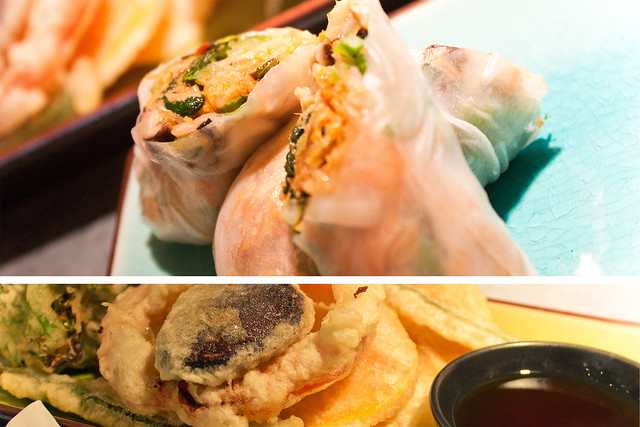 The broccoli and shiitake mushrooms were the best of the tempura, and it's nice to find vegan tempura (so often the batter is made with egg). The method and/or recipe needs work, however, as the batter was quite thick for tempura, and not crispy. It was deep fried, so still tasty, but it could be improved.

I enjoyed the rice paper rolls much more. The filling was a mix of all sorts, some of which I'm pretty sure was cooked (unexpected but good), and the flavour of the herbs came through in a not-too-overpowering way as I find they sometimes do in some incarnations of fresh rice paper rolls. 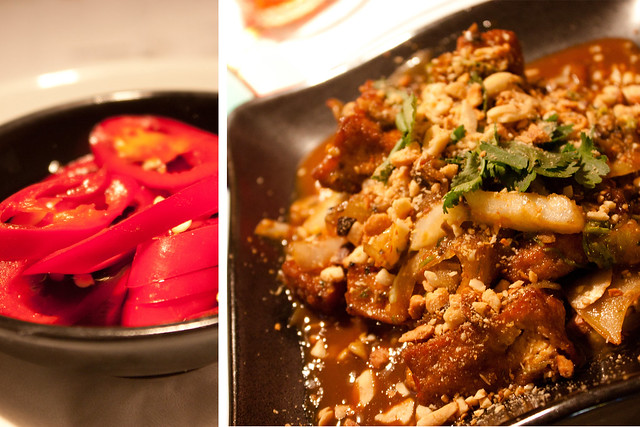 The tahu goreng, the restaurant's take on an Indonesian dish, was my favourite out of all we ordered. The texture of the tofu was what I'd expect from any good Asian restaurant – fried to a chewy but soft consistency. The tangy tamarind base was well balanced with salt and sweetness, and the peanuts topped it off to yield a quality dish. Recommended.

The chillies were chillies, although not too spicy. They were a good accompaniment to the otherwise not at all spicy dishes we ordered. I like the option of adding a bit of a punch to anything I'm eating (sri racha goes on more of my breakfasts than not). 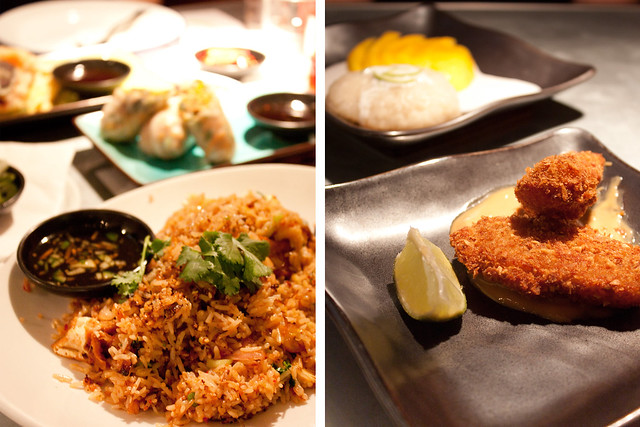 The com Hué was another excellent choice, but then again I go crazy for lemongrass so I was pretty much sold before it even hit the table. Chunks of fried tofu bulked the rice out a bit, and it was salty enough (in a good way) to not need the additional provided soy sauce on the side. Recommended.

The bananas were great, particularly the crispy coating (which stayed crispy after cooling). With a splash of lime and some of the sweet caramel sauce, it went down a treat. My one complaint is the vegan version costs the same as the non vegan version, a bit cheeky as the difference is the vegan version doesn't have ice cream.

The mango sticky rice was disappointing. I've had a lot of mango sticky rice in my time, from a lot of restaurants and kitchens between here and South-East Asia, but never have I had one without salt and sugar featuring somewhere. This was just sticky rice with sliced mango (which wasn't bad in itself) and coconut cream.

The decor is clever and it's a big space yet still welcoming, a nice balance between a covered Thai street vendor food court and a Western dining establishment. I realise my review comes across as negative but that's not to say I didn't enjoy my lunch and won't return (I did and I will, and I think it's a place well worth visiting). I just hope in future they tighten ship and get things together a bit; for instance we asked our server what made the miso soup vegetarian but not vegan, and upon asking the kitchen no one could provide a response (I have a friend who once asked at Tampopo and received the same response). I don't like when a restaurant can't tell me information about its ingredients, but I love that they make an effort with the vegan thing.