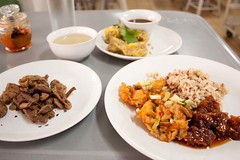 One thing is for sure, and that's the fact that you can get a whole lot of food at this breakfast and lunch only canteen for a very reasonable price. I had five dishes and my total was 117 baht, which I'd happily pay again and again for this outstanding meal. Another customer helped to translate so I was able to have a conversation with the staff, and I was provided with a list of dishes in Thai to later have translated by a Thai friend. If you can stomach two lunches you can do what I did, which was to eat both here and at U.R. Station, which is very close by. Of everything I ate, the dumplings were easily my favourite. Served with a medicinal molasses-y sauce and a bowl of broth, they were chewy and as fantastic as I expect all dumplings to be.

The most unique of the dishes (although a variant of a dish fairly common in the Thai vegan scene), the seasoned dried mushroom chips were reminiscent of the texture of meat ("like chicken," I was told). Alongside rice I was also served portions of a sweet and sour mock meat, with a hint of a ketchup flavour and with the addition of spicy-delicious holy basil. And then the fried (my, my notes are descriptive – "two fried orange things"), full of vegetables and, um, deep fry. Come on, you can't go wrong with fried so you know it was good.

Due to this being my second meal in the space of an hour I was too full to continue any eating efforts, but you should know Suan Plu Mangsawirat in Bangkok also sells vegan cookies and snacks to take away. Also for sale are a few Thai jay ingredients, like vegan cream.