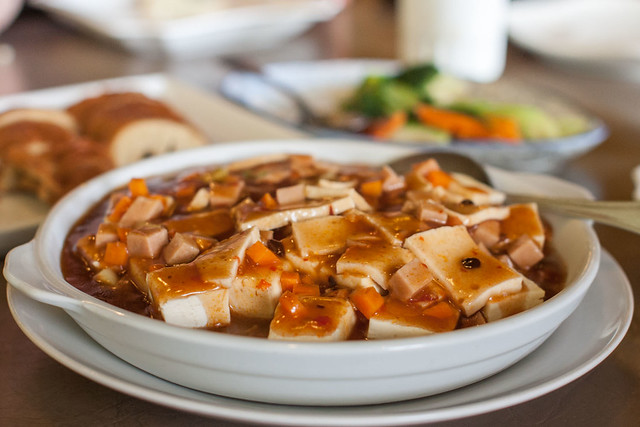 3G seems to be somewhat of an institution in Vancouver, recommended by so many people, and boasts an extensive menu to suit all tastes. For anyone who craves a typical Chinese take away, this has got to be your best bet in the city. The business is very keen to remind its guests there is no MSG, which is a turn off to me and indicates lack of awareness (ingredients like soy sauce and gluten are natural sources of MSG). The staff are very attentive and patient, and will help you decide between items on the menu if you've hit a spot of indecisiveness. Any faux meat touting restaurant with any sense at all serves May Wah drumsticks, and it's worth going to 3G just for those alone. When a Vancouverite I met at Vida Vegan Con made an enquiry on my behalf to seek out the best chicken wings in town, all the locals listed 3G as their number one. You may have had them elsewhere, too, but in my opinion any restaurant is worth a meal just to gobble these May Wah beauties down. The baby pig was yuba based, and not so much to my liking (nor to that of my partner's and parents' tastes). The texture was good, but the flavour bland. It took my mother about 4 years to decide on this one, so kudos to the guy for all that patience! I am forever seeking out the best Mapo tofu, even since my first sampling of it at a vegan restaurant in Beijing. Sadly I have yet to find a variation that even compares, but you'll enjoy 3G's version if you want something salty, warming, and filling.. Faux Chicken Something or Other from 3G, Vancouver

My dad ordered a plate of mock chicken, which he seemed to enjoy and which, again, had a fantastic texture. I can't recall what the sauce was, but it's difficult to go wrong with faux chicken no matter how it's served. Unless it's with tyres or in nasal spray or something equally dumb and inedible. The second best dish on the table, next to the drumsticks, was the buckwheat soba with spare ribs (also May Wah brand, I think). The noodles weren't outstanding, but the ribs made the dish, and according to other omnivores I know they are fairly realistic in texture.

We also sampled a few vegetable only dishes, which were a fair complement to the mound of protein on the table (but nothing to write home about). The highlights? Absolutely the mock meat. Should I ever return, that will be my focus when I order ("ten servings of drumsticks, please").