Over the years I've tried several varieties of vegan ice cream and while not completely unimpressed, I was, well, not that impressed. The first commercial product I tried was perhaps 12 years ago, and it tasted like sugar flavoured straw soaked in rain water drained from the gutter of a halted urban development project which eventually became no more than a bird toilet.

Enter Booja-Booja, an English company known for its production of organic vegan chocolate truffles. On my bulk Bonsoy run one Saturday (have you tried the stuff? It's to die for), I saw tucked in the freezer of my favourite organic shop a new gem: Pompompous Maple Pecan “Stuff in a Tub.”

This so-called “stuff” immediately rivalled recipes of my good friends Ben and Jerry in flavour, if not in texture as well. I was gob smacked. How could this be?

The culprit behind my new discovery which brought me so much joy? Cashews. Vegan, organic, delicious ice cream based on cashews.

I never knew I liked cashews so much, and I have since extended their use across many other aspects of my cooking. I tried cashew based ice cream recipes from books and from the interwebs, and with some success made made some ice creams fairly close to that of my beloved Booja-Booja.

But I wanted to experiment with my own methods based on what I already knew about making ice cream, what I'd tried and liked, and concepts about which I'd read somewhere once upon a time. This is my result, and really it's pretty good. 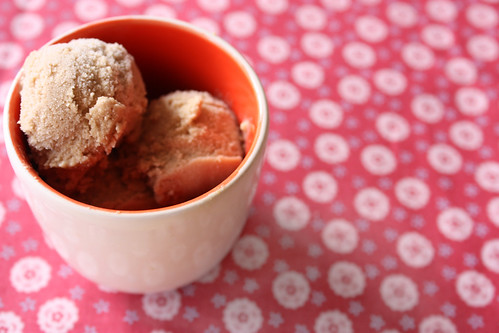 Will I make it again? Most certainly. Will I likely experiment some more with the ingredients? Definitely. This is a work in progress, only one where the first attempt came out damned good.

A lot of people ask why I used vodka in my ice cream recipes as most ice cream doesn't contain vodka. The only reason I use it, aside of course from hoping to take advantage of those I feed, is because alcohol doesn't freeze. This is a useful trick for anyone with a home freezer which doesn't circulate air well. Is your ice cream so solid upon removal from your freezer that you have to leave it to thaw before a spoon can touch it? Easy solution: add some alcohol to the mix.

I used granoVita CremoVita as part of the cream base in this recipe. While I usually like to provide generalised products for ingredients, this one fell into the mix simply because I spotted it on the shelf and had to try it. I'm sure you could use any other soy-based sweet whipping cream alternative.

The sorbet vs sherbet argument came to me when I was preparing this recipe. Sorbet is, or at least should be, vegan by nature. Sherbet, on the other hand, has dairy components (though clearly not as much as ice cream). The texture of sherbet isn't quite as smooth as that of ice cream and is generally lighter in texture, an apt description of my final result. For that reason it became more of a sherbet than an ice cream in my mind. My recipe is “creamy,” but less rich. It's good. I think so anyway.

And now on to the good stuff...