Following my write up on vegan food in Taipei, I want to cover some of the options outside of the city centre. Transportation in Taiwan is efficient, reliable, and fast enough to make day trips easily, so while I was in Taipei I visited a few outlying towns and cities. Vegetarian food is easy to find, which is handy, but even if you don't find anything you can be back in the city for dinner(s)x10. Vegan macarons and other magic at Vegan Heaven in Jiaoxi, Taiwan

One of my most notable excursions was to Vegan Heaven in Jiaoxi, which you can read about here. Another favourite was Jiufen, which houses a lot of cats and plenty of food. Fairytale. Remember Spirited Away, that magical Hayao Miyazaki film where a young girl works to retrieve her parents who are lost to gluttony (come on, who wouldn't be)? Jiufen was his inspiration for the movie, which is reason enough to visit, but there are also some worthy food finds for vegetarians and vegans. The covered market area is heaving, but wind your way through the crowds to find some taro balls (made with various root vegetables) served in a sweet syrup, hot or with ice, and with the option of sweet beans. There is also an all vegetarian stall that sells vegan versions of Taiwanese meat rolls called Rou Yuan. These translucent faux meat filled dumplings are served with a slightly sweet gravy, and the flavour is hard to describe. Strong five spice with an amaretto undertone. 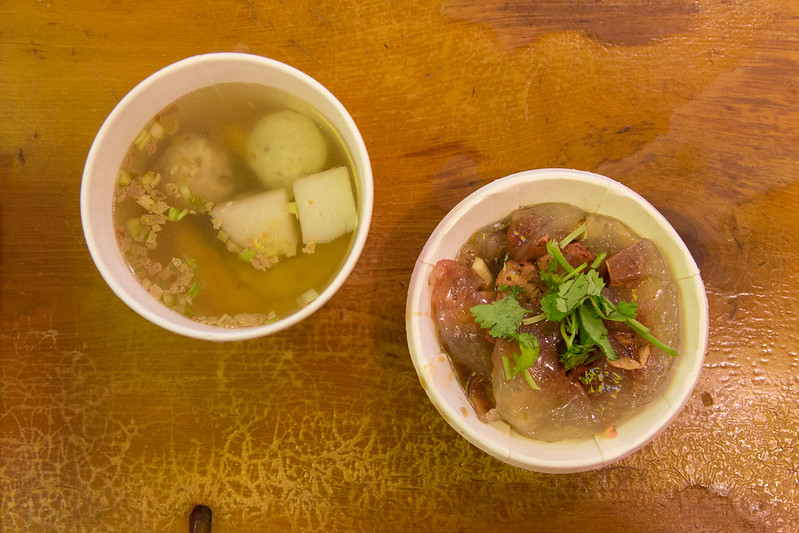 If you're still hungry and craving some Western options, there might be some garlic bread on the other side of the covered market. Wingardium leviosa to my mouth!

This single track train (formerly used for coal runs) runs from Ruifen, not far from Taipei, and Pingxi, stopping at small towns and attractions along the way. You can jump on and off at different stops for hiking and scenery, a food tour, to light a sky lantern, to visit a cat town, and to learn about Taiwan's frontier past. If you time it right, the trip from Taipei Main Station to the end of the Pingxi line, via Ruifang, will take about an hour. You'll want to hop on and off a lot though, so make it into a full day excursion. One food that is commonly found throughout Taiwan is chou doufu, bean curd that is fermented and smells like suffering. If you like strongly fermented flavours and want to try it, you don't need to look for it (just follow the scent of rotting vegetable matter and nappies). I ADORE it, but I know I'm in a minority of Westerners who feel that way. Know this, however: it tastes much better than it smells.

Should you decide to try this stinky treat, I think a good option is to first sample it deep fried with chilli sauce and pickled vegetables. The pungency is milder and the added condiments tone it down and balance the flavours, making the tofu a little more subtle and a little less overpowering.

Beware chou doufu can be fermented with any number of ingredients, including milk and shrimp, so it may or may not be vegan. Your best bet is to find a specifically vegetarian restaurant or food purveyor and enquire there. The Loving Hut on Songshan Dunhua Road 120, Lane 7 sells a glorious braised version (I mentioned it briefly in my post on Taipei city vegan options). Okay, there's nothing to eat once you get into the heart of Taipei's most accessible national park, but you would be a fool to miss it. Head to iVegan, Taipei's vegan supermarket, grab some snacks, and head out for a few hours in glorious nature. Picnic with swarms of friendly fire ants who show their appreciation in venom. Don't wear sandals, but if you forget my tip then do what I did: find solace in beer and shower that evening. Honestly, how did it take me until now to discover shower drinking? Don't laugh. Try it.