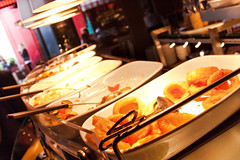 The offspring of Zurich's Hiltl restaurant (Europe's oldest veg restaurant), Tibits is the perfect spot to suit all tastes; there really is something for everyone on offer. I've never had a bad evening out here, it's a good central location, and the staff are some of the nicest folks in town. The food is laid out buffet style on what they've termed the food boat, where you help yourself to the dishes which take your fancy (there are also sandwiches, soups, and pastries at the counter). It works on a pay by weight system, which is admittedly something I doubted initially because I thought it'd cost more, but in the end I realised I don't pay more for a filling meal at Tibits than I would anywhere else in that part of the city. The menu is seasonal, so expect some dishes to shift (popular items often stay), and items are clearly marked vegetarian, vegan, with gluten, and with nuts.

Did someone say drinks? 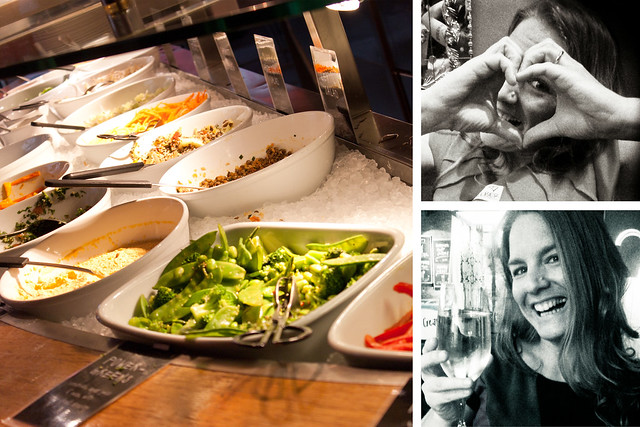 The food boat and me showing love for drinks

Once a month Tibits hosts London Vegan drinks, organised by Sean of Fat Gay Vegan, and it's one of the best nights out a wine-loving vegan could hope for. It's every third Thursday of the month from 18:30 'til closing, held in the basement of the restaurant. The chefs always lay out a big spread of vegan items at drinks too, including curries and stews, salads, puddings, and more. Two of the favourites I constantly hear mentioned by friends on the night are the sticky toffee pudding and the bean salad. Personally I am mostly focused on the Sauvignon Blanc and onion rings.

Should you wish to find me I will be the inebriated yank in the corner, dressed like an inappropriate five year old. If there are onion rings on your plate and you walk by, expect me to borrow one.

Let's talk about the onion rings 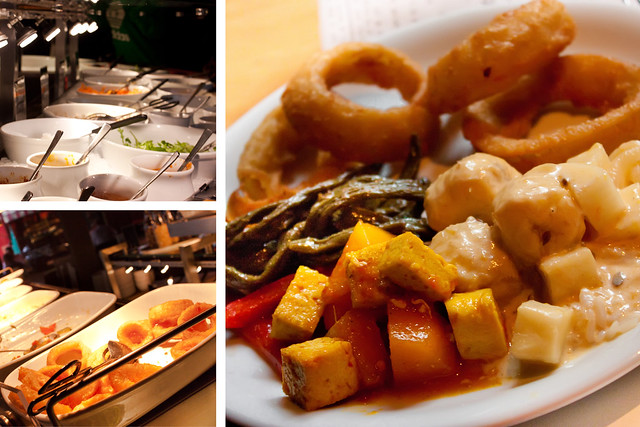 The story behind the onion rings, which, if you've ever been to Tibits with me you'll know is a bit of an obsession, is more than a little nonsensical. It all started when I learned of their vegan-ness (I hadn't previously given them a glance because there's often egg in the batter). Deep fry is one of my favourite food groups so, as you can imagine and understand, the moment was rather an epiphany.

Then there was the night they weren't on the menu.

See, I'd been having so much fun at vegan drinks (seriously, make an effort to come sometime) that a few of us returned one Friday night for a mid-month gathering (and now I find any old excuse to go). Letters were written, complaints lodged. On serviettes.

"Where are the onion rings? Stop oppressing us," they read, and were hand delivered to the kitchen by one of my now favourite staff members.

The joke with those lucky enough to be working on that fated night only progressed as the evening went on, with phone calls made to the kitchen and suggestions to perhaps accidentally falling through the door to have a word with the chef. Finally chef came upstairs for a chat and sealed himself as another of my staff favourites (who at the last vegan drinks kindly gave me a food boat tour of all the restaurant's new Spring dishes – such a nice bloke).

Incidentally I may or may not have been consuming wine that evening.

Much to my amusement I've not been forgotten by those guys, and onion rings still come up frequently in conversation whenever I'm at Tibits and they're unlucky enough to be working that shift. A massive thanks to Tibits staff for entertaining (babysitting?) me on these occasions. You guys are awesome. 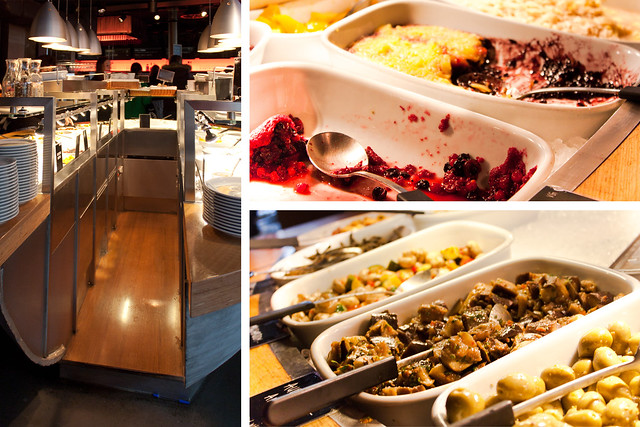 What more can I say? I love this place. Somehow the restaurant manages to present itself as ideal for both varied occasions and diners, and on so many levels to boot. From business lunches and social gatherings (large or small) to dates (well this is an assumption – I never actually learned to date, and the thought makes me squirm #SerialLongTermRelationshipper #HashtagsOnBlogPosts #EnoughAboutMeNow), Tibits is suitable for a range of occasions. Likewise it's a suitable spot for an array of diners, catering to vegans, vegetarians, and those with gluten and/or nut allergies, with all items clearly marked for suitability (moreover I've yet to hear any omnivore register a complaint about the place).

So if you're ever in central, pop down Regent Street to find this gem of a spot. A bottle (or two) of the Sauvignon Blanc and a plate of onion rings will have you sorted for the rest of the evening.