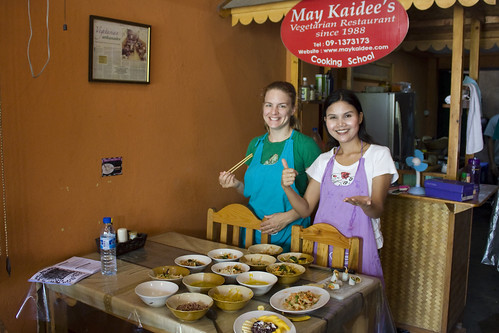 I recently had the pleasure of attending a vegan cooking class at May Kaidee vegetarian restaurant in Chiang Mai, Thailand. Not the first, nor the last, time I've been to this veggie haven, I've wanted to subscribe to their half day cooking class for years; I just never find the time when I'm around. This time, however, I bit the bullet and signed my name along the dotted line.

The class itself (which ended up being private tuition as no one else signed up) is taught by May's sister Diana and, at least in the case of my class, results in about 16 dishes. Many are simple alterations of a previous recipe, hence how it's possible to fit so many dishes into a four or 5 hour class.

Shopping sucks, except for food 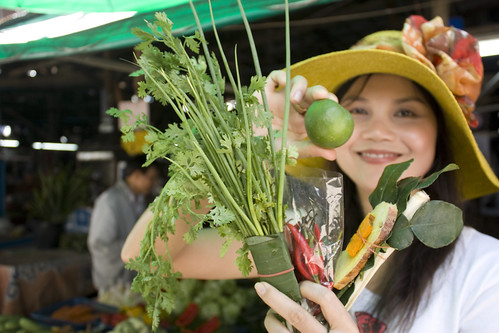 The day started with a trip to local Sompet Market to purchase ingredients and get schooled in the basics of these recipe constituents. It's fairly rudimentary stuff but if you're new to Thai cooking then it's a good summary for certain.

What follows after returning to the restaurant is a brief session in cutting and preparing vegetables, followed by an immediate relocation to the upstairs kitchen. Fires are lit, woks go on the heat, and you begin with the basics of toasting sesame seeds and peanuts, deep frying cashew nuts, TVP and tofu, plus a quick how to on and discussion of chili pastes. These are condiments you'll use throughout the morning.

Some archetypal Thai dishes and variations on the theme 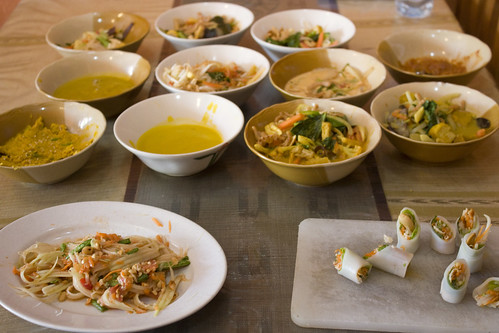 The actual recipes started with tom yam soup and tom kha soup, followed by quite urgent queries of which I prefered ("Both! How can I choose?!"). Quickly we moved on to pumpkin soup (and a second curried variation). The next dishes off the hob were stir fries: mixed vegetables with ginger and the same again but with the aforementioned fried cashews. Pad thai, fresh peanut sauce, spring rolls in fresh rice paper, and the restaurant's famous pumpkin hummus were thrown in the mix, along with the preparation of the quintessential green Thai curry and massuman curry dishes. The course was finished off with the preparation of a spicy green papaya salad and mango with sticky rice.

The class cost 1200 baht in total and that price included everything. All dishes prepared are single serving, but it doesn't take much imagination to realise that one person cooking so many solo portions still equals a bumtonne of food. Even after sharing with some interested Australian diners, Paul (who, might I add, only appeared once all of the food was finished) and I couldn't finish it off.

Would I do it again, in hindsight? Yes, definitely. Despite being aimed at culinary beginners, Diana is a passionate and information woman who can tell you just about anything you want or need to know about Thai cuisine. That alone is worth the price tag so far as I'm concerned.