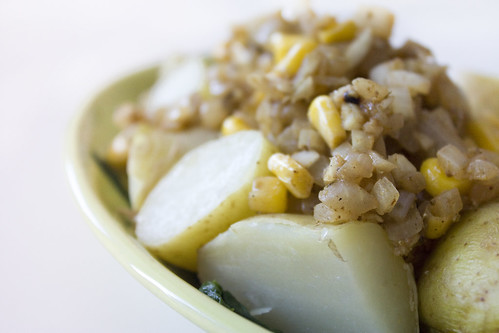 Is it wrong of me to compose two posts in a row which use potatoes as the principle constituent of the dish in question? It's the Jersey Royal season, so it's hard for me to not eat them constantly. Embrace seasonality and fill your belly with as many of these velvety spuds as you can, I tell you!

You know those indecisive days, the ones where you crave a selection of foods for dinner? Yesterday was one of those days. A bag of creamy jerseys sat on my countertop and sacks of leafy spinach were hidden away in my fridge, plus I was determined to use some of the Daiya I smuggled back from the states. Oh, and there had to be cumin involved, but curry wasn't going to fit the bill. I quite fancied some corn too.

I had to let my itch for ice cream go. No one's that good.

Perfect if you're having guests around, try making these in individual oven proof dishes to maintain the layers when serving. If you can find some then I recommend topping them with a mix of Daiya cheeses, not just for visual effect, but for taste. Sadly Daiya isn't yet available in the UK, but any meltable mozzarella substitute should work. I imagine a mix of that and the orange tofutti slices, despite sounding a bit naff, would be pretty awesome (they taste somewhat similar to the Daiya cheddar style shreds and melt well).

Anyhow, if you're looking for recipes with new potatoes and spinach, you're in the right place.

Serves 2-3 (depending on level of hunger)