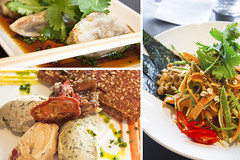 SAF has been on my to-eat list since it opened a few years back, but it's never quite fit into the plans (I don't live in London, so I usually go with the general consensus on restaurant choice, usually something more comfort food-y). In future, however, I'll just force this place on everyone or simply hit it up on my own. While you'd have to spend a pretty penny to fill a great hole, SAF strikes me as a good spot for a light meal (and they have some lunch specials). The décor and design are top notch (appeal to my artistic side and you're in with a head start) and our server was a charmer (hello good first impressions). I know little to nothing about raw food, but the food was impressive as well. Both presentation and flavour won me over and I've got my eye on enough of the other menu options to see me return at least a couple more times.

I met with a new friend (who I met via the amazing Ms Cupcake potlucks) and due to near starvation on his part we nearly left to go in search of one of London's many vegan buffets. Alas, my ninny failing phone and its inability to tell me anything (don't get a smartphone; they make you a stupidperson) and lack of decision-making skills naturally meant one thing: someone else had to be in charge of everything. So we stayed- mostly, I think, because my lunch companion wanted food pronto. 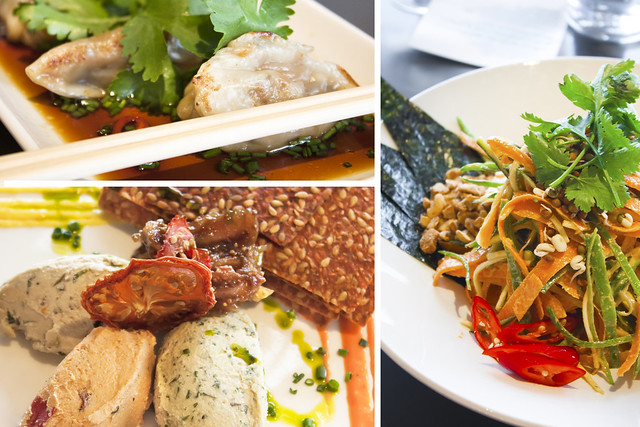 We decided to order a few different things to share, always a win-win when there are lots of drool worthy menu items. From the starters we chose the Mushroom Gyoza and the Saf Cheese Trio. Both were winners but the latter absolutely rocked the meal. I make a lot of cashew cheeses at home so my expectations were fairly high, but I wasn't disappointed in the slightest. The plate came with three varieties, a herb, tomato, and olive cheese (if I remember correctly). All were equally good in my mind. I'm always doubtful of anything containing flax (I love what it does for baked goods, but if I can taste it then you can keep it all), but for some reason their raw flax crackers don't have the same grassy flavour. Orange and yellow pepper coulis garnished the plate, along with a jam and fresh herbs. It's pricey at £14.80, but a treat worth the splurge.

The gyoza was also tasty, but a little misleading. The menu describes it as "wrapped in bean curd," but it was steamed in ordinary flour dumpling pastry. Our server informed us the change was due to the curd not holding up as well, which I can understand having worked with yuba myself (assuming that's what they were using). The shiitake mushroom filling still stood out (how could anything with shiitakes not?) but I'd have loved to, purely out of curiosity, see how they made the soy based version.

I was a big fan of the Pad Thai on Manna's old menu, so the same stood out immediately on SAF's menu. Plus our server  recommended it as his favourite, so that's what we opted to try. Dressed in a creamy chipotle sauce (not very spicy unless you choose to consume the chilies alongside), the dish came stacked with courgette noodles, thinly sliced carrot, fresh coriander and tomatoes, sprouts, peanuts, and what I'm assuming was mangetout. A cool addition to the plate was a few sheets of nori; my buddy had the smart idea of making little sushi rolls, which were ace. Totally worth ordering. 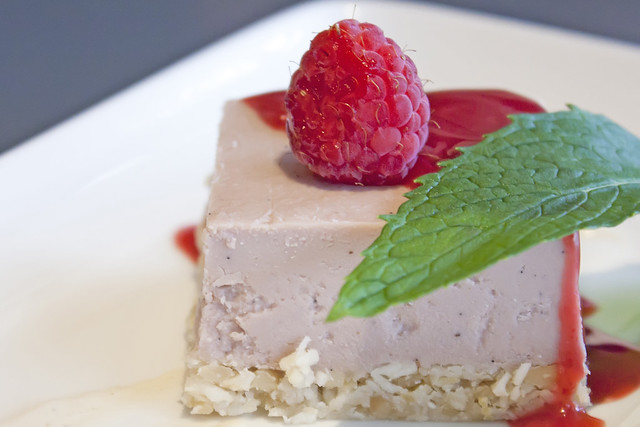 For pudding we split a slice of the berry cheesecake, a creamy cashew based treat in a coconut crust with berry coulis. Some vegan cheesecakes are naff, but thankfully this was completely the opposite. I pretty much licked the plate (surprise from classy ol' me).

Don't discount raw food just because it sounds, well, like raw food. I've been happy with every raw meal out that I've tried, and SAF was no exception. I can't wait to go back to try their Pho (And eff me, the Havana Daydreaming cocktail looks... dreamy!)