Okay, okay, so my main point of this post is to encourage everyone (omnivores, vegetarians, and vegans alike) to purchase Isa Chandra Moscowicz's latest book, Vegan Brunch. It just happens this very simple but also delicious recipe for a fruity chocolate smoothie goes great with brunch.

See the muffin in the smoothie picture? That's a blueberry ginger spelt muffin from the book, and it's good too. They aren't too sweet like muffins often are, and the texture is both gooey and nutty with a sweet grainy mouthfeel (what a word, what a word...). Key ingredients include blueberries and crystalised ginger (though I'll admit I added a bunch of powdered as an alternative). It's a good one for anyone who likes some sugar in the morning but not in epic proportions. 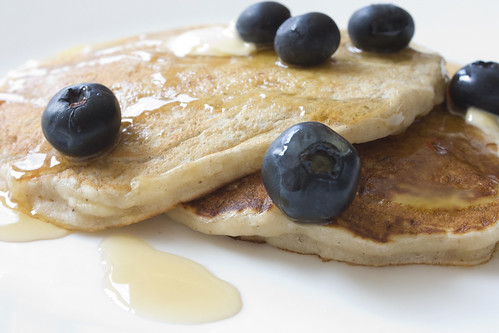 ...but if you do want some seriously sweet heaven in the A.M. hours then the banana flapjacks (a form of pancake in the US as opposed to the rolled oat bar in the UK) are the treat for you. Served here with some non dairy butter and fresh blueberries, these babies are pretty fab. 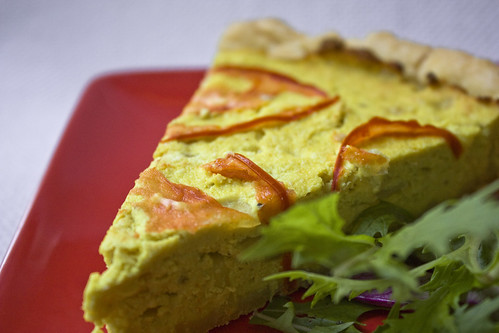 And here we have the Vegan Vidalia (sweet) Onion Quiche, a tofu dish for even the most devout of quiche fans. 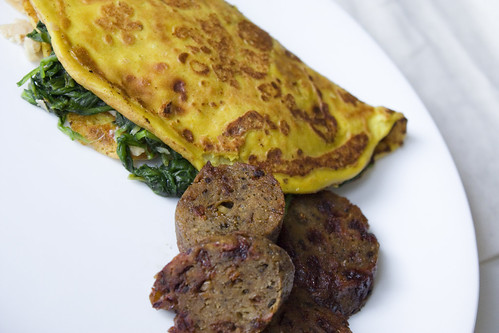 I'm pretty sure if this was thrown in with a random pool of food pictures, "this looks vegan" isn't the first thing a random browser would think. Probably two of the greatest recipes in the collection (based on the fact that I've cooked maybe ten), the vegan omelette and the vegan sausages are pure genius.

Does the omelette pretend to be an egg? No, not really. It's heavier and smoother, but the general taste isn't that far off. Methinks this will be the foundation for some amazing vegan "egg" dishes in future. I've already got my imagination cells set on a few, so watch this space.

Do the "sausages" pretend to be sausages? Well, this one can be argued. Sausages come in a variety of shapes and textures, with a gazillion recipes for herb and spice mixes to flavour. In fact, it seems most of the flavour of sausage tends to come from what's included with the meat as opposed to the meat itself. With that thought in mind it's really the texture you're after, and gluten is the vegetarian/vegan answer. Shown above are the cherry sage sausages from Vegan Brunch, in which a main ingredient is gluten flour (and almond okara- my own addition). I'm already planning a Cumberland version!

Oh, and the smoothie recipe.