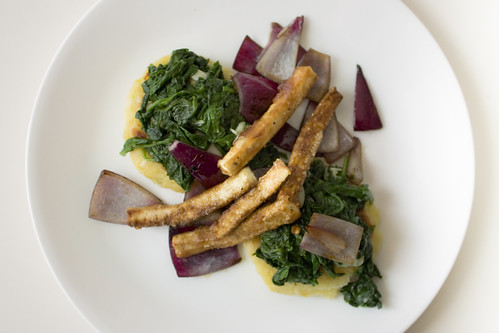 Fried spring onion filled potato pancakes are served in this vegan main topped with steamed spinach and smashed roasted garlic cloves, topped with crispy fried tofu matchsticks and stir fried onion. A lot less complicated than it sounds, it makes a filling meal for two (um, and you get to play with mashed potato with your hands. Hello, fun)!

I challenge anyone to turn up their noses at any dish making use of the creamy subtle taste of oven roasted garlic. And, well, if you do then that's fine too because it's more for me. To me, garlic is one of life's greatest pleasures, as is spinach. Potato too. I'm a big fan of tofu to boot. Who am I kidding? I just like to eat.

Remember: if I can manage a recipe without wearing more than 10% of its ingredients by the time step one commences, then it's likely doable by most other folks too. Translation? This is doable by all of you, despite the long list of steps.

Potato starch may not be part of your kitchen pantry repetoire, but I recommend it highly. It's one of my favourite starches for frying because its texture can be both crispy and gooey at the same time. Alas, if you don't have it then corn flour should be okay too. You don't exactly need to coat the potato in anything before frying it, so don't sweat the small stuff like that. I just like the texture, but many potato pancakes have been thrown on a skillet in this world, sans starch.