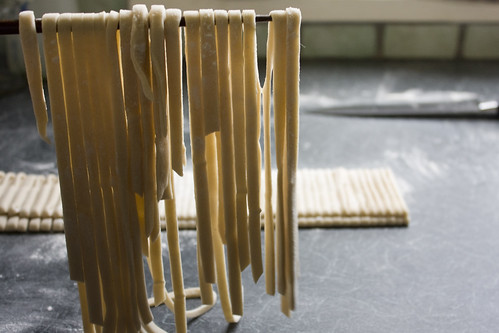 It never ceases to amaze me how much homemade pasta brings out a person's' wow face. You know what I mean, that "oh-mah-gawd-you-mean-you-didn't-buy-this-pre-made" look, the one that makes you feel like you've reached the outer limits of culinary possibility, that you're the equivalent of a rocket scientist in the kitchen. Err, no, I promise it's not like that. I can barely tie my shoes; I swear making your own pasta and noodles isn't a complicated procedure.

It is, however, more time consuming. These homemade noodles take a few hours, though most of that time the dough lies dormant, on its own, while you're off getting on with the rest of your morning. Go take a nap, go to work, or do whatever it is you people do when you're not noodle-making. Draw pictures, send me an e-mail. Whatever.

My point is, these home made udon noodles are easy. Your total manual labour time will shape up to just 20 minutes or so, and it'll be worth it in the end.

The trick with cutting the noodles is to use a lot of flour so they don't stick together when folding them. Why bother folding? Because it's just easier that way, allowing for shorter cuts when you whip out your knife to cut the dough. Use a sharp chef's knife, something that will cut swiftly and distinctly through the dough to avoid anything sticking. 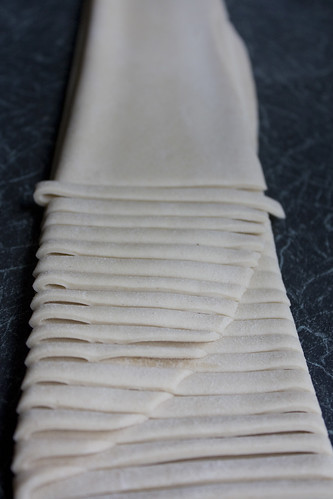 The sesame oil is an optional ingredient, but I like the mild flavour it imparts. If you're planning to use the noodles in a very basic dashi or miso broth, I'd recommend its use. If you're using the udon in a dish with a more complex flavour profile then it's probably a safe bet to say you can skip the sesame.

Serves 3-4 as a soup/curry base