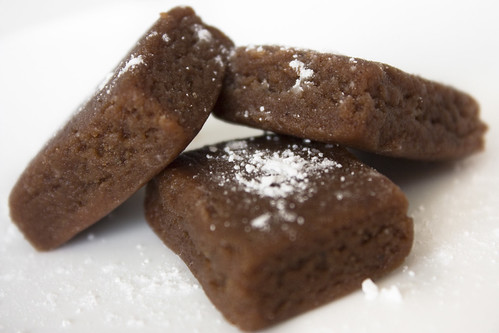 I've been the last two weeks pretty much playing non-stop with my new Vitamix, a gadget for which I've long yearned and have finally acquired. One of the biggest pros about the machine, from these peepers at least, is its ability to quickly and easily make nut butters. With great masses of peanut, cashew, and almond butters stacking up in my limited kitchen space, however, I needed something to actually do with it all.

Vaguely reminiscent of the popular Indian sweet Badam Pak, this vegan fudge uses an almond butter base for both texture and flavour. Almond butter is a smooth and creamy paste with a mild enough flavour to take on the stronger essences of coffee and chocolate, thus making the perfect foundation for a flavoured non-dairy fudge.

Getting the consistency of the sugar syrup right is fairly important, but the worst that will happen if you don't is your fudge won't be as solid. You've got a couple of options at this point, the easiest being to roll tablespoonfuls into balls (which you can then coat with sugar, chopped nuts, or paperclips. Except possibly not the latter).

The second option is to remove some of the moisture by cooking the mixture further. If you opt for this choice, make sure the heat isn't too high and that you stir constantly.