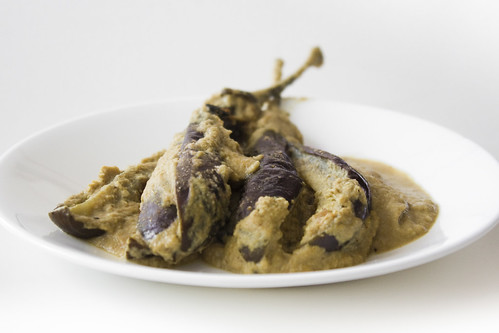 A popular Hyderabadi dish, Baghara Baingan is a dish of eggplant (aubergine) cooked into a creamy nutty coconut gravy with the added tang tang of tamarind. If you think you don't like any of these ingredients on their own, I urge you to try them married together here, in this traditional recipe often served during special occasions and on holidays. 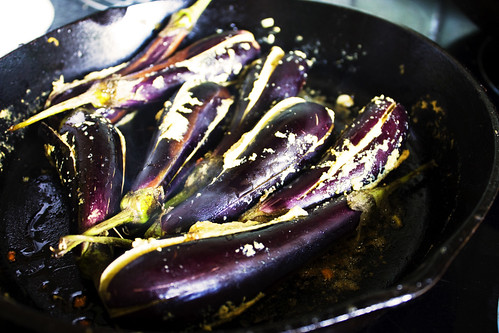 While it seems complicated initially, this is a pretty straightforward and easy vegetarian hyderabadi recipe. Recipes and cooking recommendations vary, with some insisting on frying the aubergine in oil first and others demanding the use of chilis (speaking of which, add chili if you want it; I simply don't because I live in in a place where a chili on the other side of the room will set someone's mouth alight). Also, technically, you should seek out the smaller rounded variety of Indian eggplant but any small aubergines will do.

If you don't have a liquidiser (blender) to make the sauce, a food processor, nut grinder, or even pestle and mortar will also work. I used my vitamix for the sauce, but it's certainly not a necessity to use something quite that powerful. You just want something, at the very least, to crush the dry-fried spices.