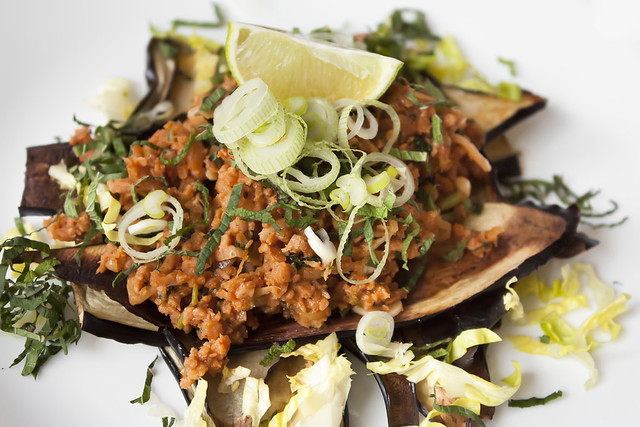 I make no secret of the fact that, combined with bright colours and office supplies, I'm a big admirer of aubergine (that's eggplant to some of you). All the best vegetables start with the letter "A" (don't get pedantic about this, kids- I know aubergine is technically a fruit), from artichoke and asparagus to aubergine and avocado. If it weren't for the b-veggies and k-greens I might just be able to survive on the a-list alone.

I accept donations of free pens. Just putting that out there.

Should you choose to anthropomorphise this dish then sure, it would totally be a bit uppity and hot on itself. That's no surprise, what with the Thai influences and the underdog eggplant star; there's a whole heap (pun intended) of undetected cool in this jumble of ingredients.

The TVP packs a strong salt punch, a good pair with the mild smokey eggplant beneath. The lettuce is a texture thing, and the mint combined with the soya protein reminds me slightly of larb. Squeeze a wedge of lime over the whole shebang for a tasty meal that's easier than it looks.